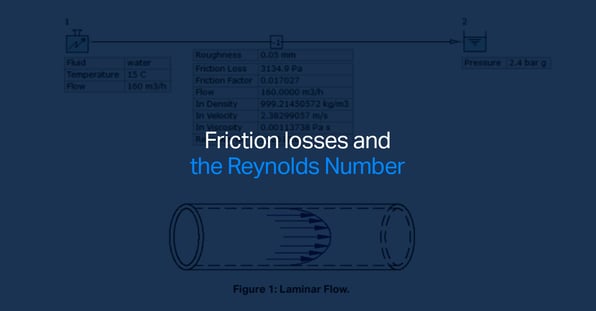 Friction losses and the Reynolds Number

The Reynolds Number (named after Osborne Reynolds) is a dimensionless number and can be described as the ratio of inertia forces to viscous forces within a fluid which is subjected to relative internal movement due to different fluid velocities. In the case where viscous forces dominate over interia forces, the flow is said to be laminar and the fluid flows in smooth straight orderly streamlines in the same direction whereas when inertia forces dominate, the flow tends to be unstable, and the flow pattern becomes irregular breaking up into random fluctuating eddies. The latter flow condition is said to be turbulent flow. Figure 1 and Figure 2 provide an illustration of the laminar and turbulent flow regimes respectively.

Laminar flow is therefore characterized by concentric layers traveling in parallel along the pipe length where the highest velocity is found in the pipe centreline and gradually decreases outwards towards the inner surface of the pipe.

When developing the Reynolds concept for Newtonian fluids, it was discovered that it as possible to predict the velocity or flow rate at which the transition from laminar to turbulent would occur.

When analysing flow conditions in pipework, a Reynolds Number in the range of up to around 2100 is considered to be laminar and above 3100 is said to be turbulent. The range between 2100 and 3100 is referred to as the critical or transitional region. Estimating the friction factor in this critical region is complex as it may not be obvious if the flow is laminar or turbulent. The critical region is characterised by a combination of properties of the laminar and turbulent flow regimes.

When modelling piping systems in FluidFlow software, a warning message is enunciated to advise the user that the flow conditions are in this critical or unstable region. Users also can change the Reynolds Number setpoints of 2100 and 3100 if required.

The Reynolds Number is given by the equation: 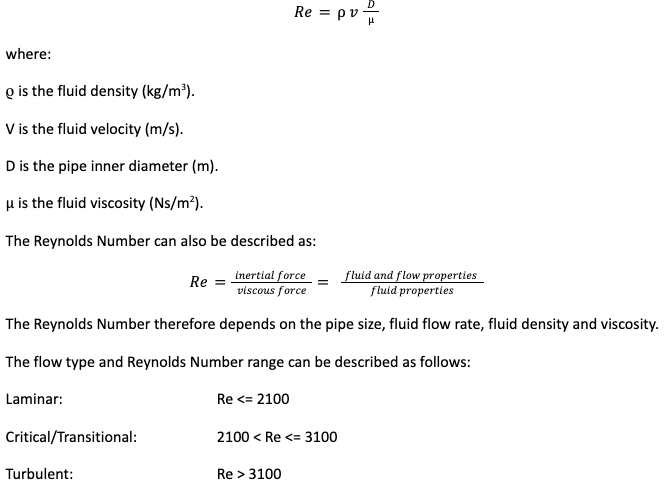 The flow type and Reynolds Number range can be described as follows:

D is the inside diameter of the pipe (m).

The Moody chart is a graphical representation of the friction factor (f) for all flow regimes (laminar, critical & turbulent) against the Reynolds Number at various values of the Relative Roughness of the pipe. Figure 3 gives an example illustration of the Moody Chart. 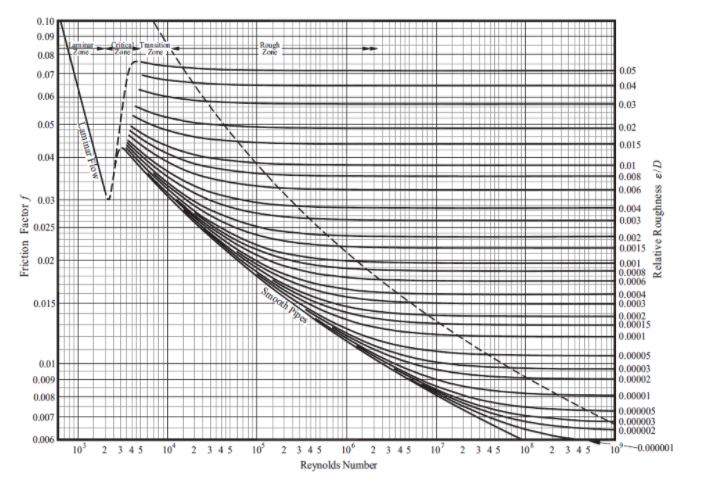 The following example as shown in Figure 4 demonstrates the calculation of Reynolds Number and Friction Factor for a pipeline transporting water at a flow rate of 160 m3/h. The Reynolds Number is calculated as 322610.6 and the Friction Factor is calculated to be 0.017027. This example is based on a pipe absolute roughness of 0.05 mm which is common for new or clean pipes. Users have the option to change the absolute roughness value to reflect your specific design conditions.

The Reynolds Number in the hand calculation matches that of the software. If we check where the values of Reynolds Number and Relative Roughness intersect on the Moody Chart, we can then read-off the value for friction factor on the left of the chart. The value for friction factor is approximately 0.017 which correlates well with the software result.