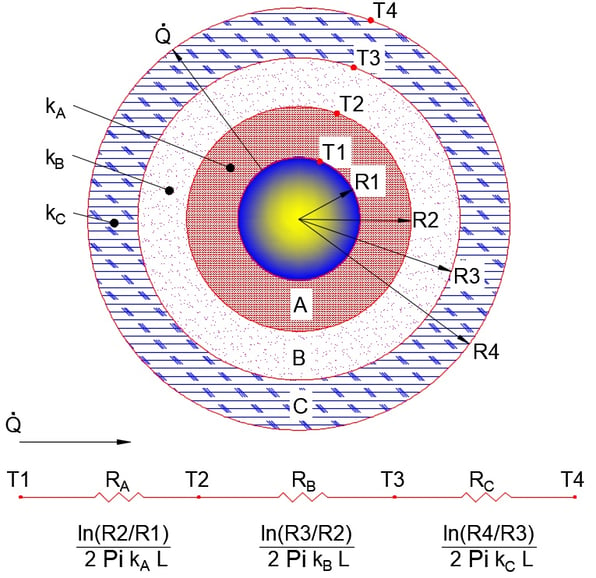 Heat transfer in pipes and using FluidFlow to understand these effects.

Heat transfer between the fluid and the pipe’s surroundings is an important aspect of piping system design and a computer program is often a useful tool to use to help understand the effects of heat transfer. The addition or removal of heat to/from the pipe flow stream can change the fluid viscosity, change the fluid phase-state, i.e. change from liquid to solid phase, cause cavitation, it can cause the surroundings to freeze or melt and in the case of gas flow, can cause significant changes to the fluid density.

Pipe heat transfer can be quite a challenging task and can become increasingly difficult as layers such as insulation are added to the pipe.

Pipe heat transfer to or from the surroundings can occur by one or a combination of the following three known heat transfer processes, convection, conduction and radiation.

Conduction: This refers to the mechanism whereby an energy exchange occurs between the fluid and the pipe wall, insulation and soil (if the pipe is buried) due to direct contact.

Heat transfer in piping systems, in its simplest form, can be for a single uninsulated pipe. However, it is often the case that the pipe has a layer or several layers (insulation etc) which the complicates the analysis. Figure 1 gives an overview of a cross-section through a pipe with a number of concentric, cylindrical layers.

k is the thermal conductivity of the material (btu/h ft F).

T is the temperature (F).

Performing pipe heat transfer calculations allows designers to better understand system operating conditions and select the most suitable and economic thickness of pipe insulation required for a given application.

Below are a number of points which highlight some of the main benefits of insulating piping systems:

Insulation of piping systems serves an important function in the operation of oil and gas facilities, petrochemical processes, chemical processes, oil refining plant as well as chilled water systems, district heating system and refrigeration plant, to name a few. In some industries, refrigeration systems can account for a significant proportion of overall site energy costs. The correct selection and use of insulation on these piping systems can significantly improve system efficiency, with thermal performance and condensation prevention being the key considerations.