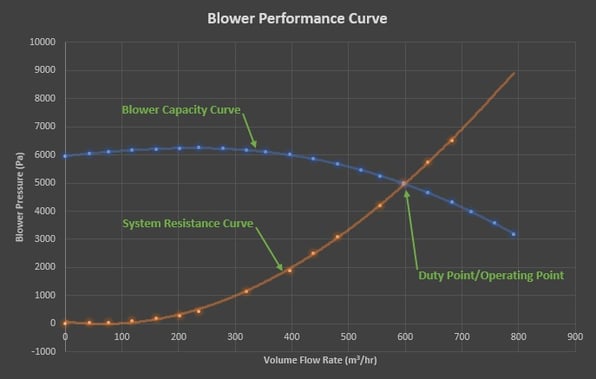 Blowers and fans generally provide air movement for industrial processes and for ventilation. The difference between the two devices is the system pressure they operate against and the method used to move the air. Blowers by comparison tend to operate at higher pressures than fans.

When designing a system which utilises a blower, the engineer will typically need detailed knowledge of the application and its requirements. This means, an estimate of the blower design duty point, i.e. the flow rate required and the resistance to this flow rate arising from ductwork, bends, filters, fittings etc. This resistance is also known as system resistance, backpressure or head loss. Figure 1 provides an overview of the curve

The system resistance curve characterizes the pressure drop in the system for a given flow rate.

When both the blower performance curve and system resistance curve are overlaid on the one chart, the blower duty point can be established. The required performance can be achieved by a number of blower models however, each will exhibit a different efficiency. The ideal blower selection will be one which offers the desired performance at an optimum efficiency resulting in the least amount input power required.

Blowers are often speed controllable which means in a system with dynamic operating conditions, the speed can be reduced to a desired operating point or increased if a different operating point is required in a dynamic system.

Changes in blower performance based on speed changes is reasonably predictable using the fan laws and Table 1 describes the equations used to predict the change in flow rate, pressure and power as a result of changing the operating speed. The subscript 1 represents the initial existing condition and subscript 2 represents the revised calculated condition based on speed change.

In any flow system, there is likely to be elevation change (potential energy or elevation head) that also contribute to the energy content of the flow stream at a given point in the system. These changes in elevation head or potential energy for gas flow is often quite small can is sometimes ignored. However, when blowers are modelled in FluidFlow, these effects are taken into account to develop a more accurate reflection of the system operating conditions.

As fluid density is independent of the blower, it is important to specify the density of the fluid as part of any equipment selection or performance specification. When modelling blowers in FluidFlow, the fluid density is automatically traced throughout the system and the effects of density changes included in the solved system.

Blowers are often used to move air however; they are also used to move explosive or non-explosive gas mixtures. In some cases, the gas mixture is considered to be an ideal gas. FluidFlow doesn’t make this simplifying assumption but solves for real gas conditions using an equation of state.

Compressible flow systems which use blowers can be designed and modelled using FluidFlow software. The blower performance characteristic curve can be defined in the database using your preferred units for flow and pressure. When using volumetric flow rates, the units can be reference to either STP or NTP conditions. The unit’s environment can be customized to display the units you prefer to use, i.e. mass flow, volumetric flow, pressure in psi, kPa etc.

Figure 2 below gives an example blower performance curve. This curve data is a based on a pressure blower unit by the New York Blower Company at a speed of 3500 RPM.

The performance data was then added to the FluidFlow software database. Figure 3 then gives an overview of the data-entry utilised in the software.

A system design is developed as shown in Figure 4 and the blower performance evaluated. System static pressures, velocities, friction losses, flow rates etc can all be evaluated and the system performance optimised.

In summary, when blower systems are modelled in FluidFlow, the software doesn’t make the simplifying assumption of the ideal gas equations and does take account of density changes as well as the effects from elevation changes in the system. Modelling the system also lets designers clearly establish the operating conditions of the connected system and consider dynamic operating conditions, i.e. changes in operating speed etc.