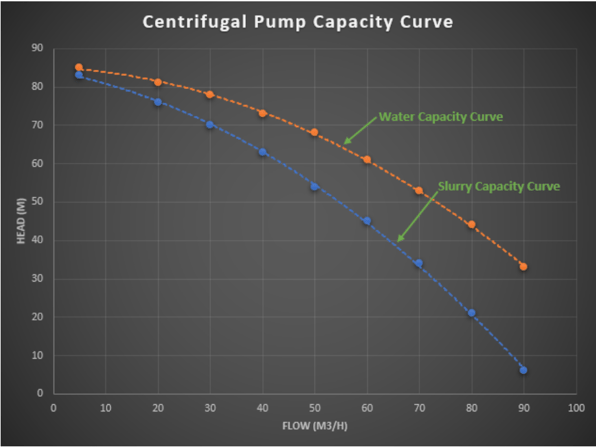 Slurry Pumps - Some Considerations for Sizing and Selecting

Slurries can be found in a range of industries including power generation, mining, steelworks, foundries etc and offer a convenient means of handling solid particles. A slurry is typically made up of a mixture of a carrier fluid (usually water) and solid particles. Slurries can usually be described as settling or non-settling.

Settling slurries consist of large or coarse particles which can exhibit an unstable mixture. Many slurry systems consist of coarse particles in transit and operating under these conditions requires careful consideration of wear as well as flow and power calculations when making a pump selection.

The pumping and transportation of slurries in piping systems therefore represents one of the most challenging fluids to transport, particularly at design stage when we may need to predict the slurry characteristics.

Centrifugal slurry pumps are often comparatively larger than their liquid pump counterpart to achieve lower operating speeds and a lower wear rate of the pump. They also usually require more power to operate because they are less efficient compared to their liquid counterpart. The slurry pump shafts and bearings also need to be much more robust and rigid.

As slurry pumps tend to operate in a harsh environment, the pump should be selected to operate at a speed which is as low as possible to reduce wear however, conversely, the pump must operate at a high enough speed so as to avoid the slurry particles settling and potentially blocking the pipeline. It’s also worth considering reducing or optimising the pump discharge pressure to the lowest practical point to reduce wear. In any case, the piping system should be designed to optimise the performance of the pipeline and pump. This can be a difficult task as with slurry systems, the operating conditions such as particle size and concentration can vary considerably.

The performance characteristics of a centrifugal pump pumping for example, water, is noticeably different to the same pump pumping a slurry. The difference depends on the slurry characteristics. Factors such as solid particle size, shape and density all effect the overall slurry properties and as such, pump performance. It’s no surprise that the pump, head, efficiency and power are all affected and in an unfavourable direction. Figure 1 gives an overview of the expected performance curve profile for a centrifugal pump pumping water vs slurry. 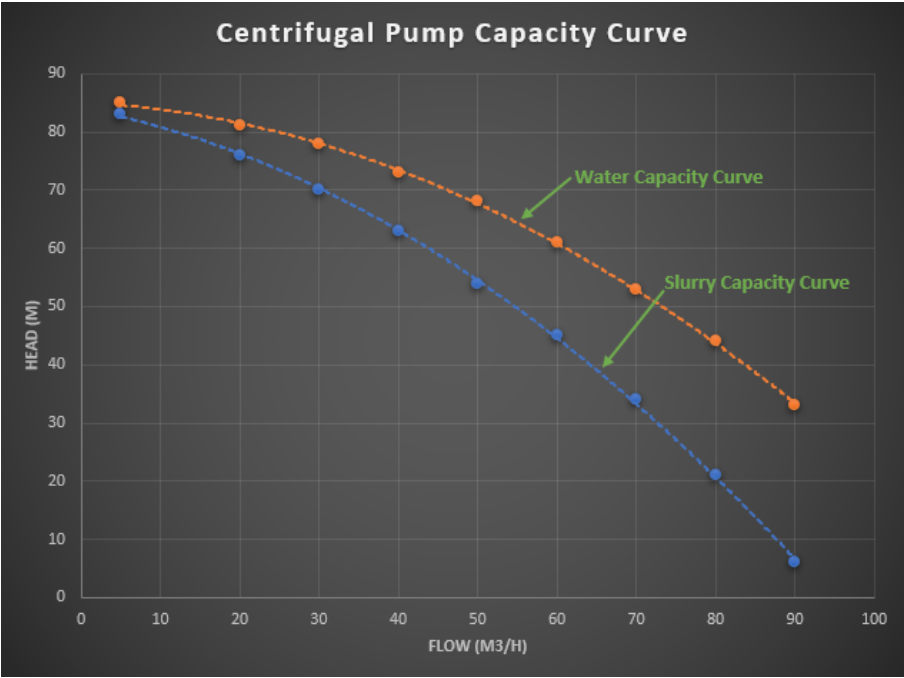 In order to size and select a centrifugal pump suited to a slurry application, the starting point is to source good quality physical property data for the slurry and the solids to be transported. This then should be used in conjunction with the design pump flow rate, head requirement and piping system characteristics. A suitable modelling software tool should ideally be utilised to help characterise the slurry, size the pump required and predict the performance of the vendor pump in the system.

A suitably sized and selected pump should be capable of overcoming the pressure losses incurred by the system pipework and fittings and the flowing slurry velocity should not fall below the critical velocity of the transported slurry. The critical velocity is of course the velocity at which solid particles settle in the pipe so it’s important to keep the slurry velocity above this minimum value. However, pumping the slurry at too high a velocity increases the pressure losses which can result in wear of the piping system. Conversely, pumping the slurry at too low a velocity can of course lead to settling/sedimentation in the pipeline which also increases pressure losses in the system. It’s therefore vitally important to establish or predict this critical velocity value. There are many approaches to this task.

A good software tool can help identify the slurry critical velocity as well as system trouble-spots and issues such as sanding/settling and the potential for pipe blockage. Software can therefore be very powerful in terms of optimising the performance of a pumped slurry piping system.

Another item which needs consideration when selecting a centrifugal pump for a slurry system is the Net Positive Suction Head available, (NPSHa). The inlet pressure of the pump must exceed the vapor pressure of the liquid/slurry within the pump. The NPSHa is dependent on the vapor pressure of the fluid, ambient air pressure, density of the fluid and the level in the sump. In any case, it is important that the Net Positive Suction Head available (NPSHa) is not less than the NPSHr. If the NPSHa is less than the pump NPSHr, vapor bubbles occur in the impeller and when these bubbles reach an area of higher pressure, they can collapse causing damage to the pump impeller and volute. This condition can also exhibit noise, vibration and the efficiency of the pump is reduced.

This blog outlines just some of the conditions for consideration when evaluating pumps for slurry piping systems. It in no way attempts to address all aspects of slurry flow which in itself, can be a complex problem.