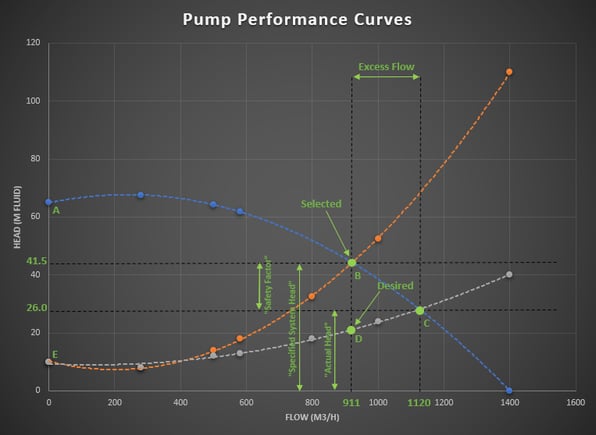 Pumps can be oversized for a number of reasons. Sometimes a pump is sized early-on in the planning or concept-design stage using estimated values for pipework and fittings losses. A degree of error can occur at this stage as it would be necessary to guesstimate the pipe lengths, quantity of fittings etc as well as the possibility of published literature having different reference values for flow resistance coefficient or fittings losses. As a consequence, the dynamic pressure losses can be questionable. On the other hand, the static pressure differences are often usually better defined.

Another potential reason for pump oversizing is perhaps the system being designed will potentially expand in a few years and the pump size calculated won’t meet this future additional demand. A “safety margin” is sometimes added which can often be an arbitrary value. A larger pump is then procured and installed with the view to serving the future extended system.

Other reasons may include, the selected pump was the only pump in stock by the supplier and a pump was required urgently – deal was agreed with the vendor and the pump procured, a pump was perhaps selected from the spares inventory due to budget constraints or, a new replacement pump was selected for an existing system. This new pump matched the pump already installed however, the existing pump was already over-sized. Another reason might be the designer over-sized the pump based on expected build-up of corrosion products on the pipe interior and as such, would over time increase the pump total head requirement. One final point to consider is, as a pump wears, there can be a reduction in head and capacity. This may present the argument of initial additional “safety factor” to increase the capacity and head with the view to counteracting the eventual effects of wear.

Some of the above reasons may seem reasonable however, it is sometimes the scale of “safety factor” applied which can lead to knock-on negative effects on the final pump operating conditions, capital and running costs etc. This can be compounded by a vendor selecting a pump which has another “safety factor” to be certain there there is “enough pump capacity to do the job”.

Let’s take an example scenario to illustrate the effect of pump oversizing.

A designer has established a design flow rate of 911 m3/h at 26.0 m fluid. Believing that using a safety factor will ensure we reach duty-point D as shown in Figure 1, the designer erroneously adds 15.5 m fluid head to obtain a total head of 41.5 m fluid. Figure 1 gives an overview of the performance curves for the system under consideration.

Assuming the designer actually needs a pump to operate at 911 m3/h and 41.5 m fluid head, a pump vendor selects a pump with a curve A, B & C. The pump curve intersects the system curve at the best efficiency point. However, the actual system curve is E, D & C and the pump will run at duty-point C rather than B. This is because the pump seeks equilibrium with the system and operates at the intersection of the pump curve and system head curve. At point C, the pump will produce a flow rate of 1120 m3/h. So, not only will the designer achieve different operating conditions, the pump is also operating at a lower efficiency point on the pump curve and therefore, exhibits a higher operating cost.

In order to achieve the original intended design flow rate of 911 m3/h, the system valve is gradually closed/throttled. This will “steepen” the system head curve since we are adding resistance to the system. The pump then produces 911 m3/h at 41.5 m fluid. However, the head requirement at 911 m3/h is 26.0 m fluid. The pump therefore actually produces 41.5 m fluid and 911 m3/h but delivers only 26.0 m fluid 911 m3/h to the system. The additional 15.5 m fluid head is wasted across the valve as heat and noise.

What are the cost implications of oversizing a pump?

Now, let’s make a quick “back-of-an-envelope” calculation for this example and assume that this pump is 60% efficient at duty point C.

The difference is 175 – 96.7 = 78.3 kW which is being used to pump against the throttled discharge valve. Note, a discharge throttling valve is often used to overcome the effect of pump oversizing since it’s a simple solution to complete on site however, it comes at a cost of wasteful energy consumption. If this were a pump which was running 24 hours a day, this would mean we would have 24 * 365 * 78.3 = 685,908 kW per annum of wasteful energy use. How much are you spending on a kilowatt hour of electricity? Let’s assume it is $0.05 c/kWh. That simply means we are wastefully spending 0.05 * 685,908 = $34,295 per annum on operating costs for this pump alone.

We can see from Figure 1 that the pump duty point would actually be closer to the end of the pump curve than intended but what are the practical implications of operating a pump towards the end of the curve? Firstly, pumps are designed to operate near their highest or best efficiency point. When they operate towards the right hand side of the curve, the likelihood of cavitation increase. The suction and discharge pressure can fluctuate wildly pushing the impeller about because of the out-of-balance forces. The pump shaft rattles, packing becomes worn, mechanical seals become damaged, bearings are destroyed by hammering (brinelling) and shafts are bent. In operation, pumps will be noisy, vibrate and shake, get hot and the microjets of fluid ejected by imploding bubbles will erode the impeller. As a result of these conditions, the pump will unsurprisingly tend to require a lot of maintenance and will fail regularly.

How can I tell if my existing pump is oversized?

There are a number of factors which can suggest that an existing pump is oversized for the installed application. Let’s look at a few:

Control valves installed in system featuring centrifugal pumps tend to stay in restrictive valve positions which in turn forces the pump to work against a high back pressure. Since this is higher than the pressure required for the pump to achieve its best efficiency point (see previous blog-post titled “Operating Efficiency of Centrifugal Pumps”), the pump runs inefficiently and at risk of increased bearing wear.

An oversized pump can cause excessive noise and vibration of pipes which over time can loosen flanged connections and joints as well as cause fatigue of pipe welds. This can lead to premature wear and failure. Surprisingly, excessive noise can sometimes go unnoticed since the site operators may simply be used to a given noise-level on site and as such, it is considered since the plant is operational and in sound working order.

Regular Replacement of Bearings and Seals

Oversized pumps tend to generate high backpressures which results in accelerated bearing and seal wear. If a pump requires frequent replacement of bearings and seals, this could be an indication that the pump is oversized.

Heavy use of bypass lines

Bypass lines are sometimes used to manage excess flow and allow a pump to operate closer to its best efficiency point (BEP). Whilst this may improve the reliability of the pump it also results in wasteful energy consumption since the energy required to move the fluid through the bypass lines is wasted. If a system has a large number of bypass lines, it could be in indication of that the system has scope for improving its energy efficiency.

Pumps are sometimes used to maintain a steady liquid level in a tank, draining and filling as required. This constant cycling of powering up and down reduces the lifespan of the pump motor controller and pump assembly which means the pump will be more at susceptible of intermittent operation. Oversized pumps tend to generate higher friction losses since they force a greater flow rate of fluid through the system that it needs to. When these problems get progressively worse, the pump will begin to operate sporadically before failing completely.

Potential steps to overcome or resolve oversized pumps include: reduce pump operating speed, reduce the pump impeller diameter or replace pump with correctly sized and selected pump model. This would represent some of the more energy efficient means of resolving the issue.

Another option would be trimming the pump impeller as this reduces energy consumption due to excessive head from an oversized pump. An impeller can be trimmed with the view to getting the control valve to operate in a more desirable position, i.e. between roughly 40 to 60 % open. If for example the control valve has an initial operating position of say 25%, then the impeller can be trimmed to obtain a more desirable position such as 55% open. The pressure drop can be estimated using the control valve equation by getting the Cv for each valve position. It should be noted however that this does little for over capacity of the pump sizing. Trimming the impeller can in some cases lead to lower pump efficiency.

Perhaps the pump can be provided with a variable frequency drive (VFD). This can be a good solution to removing the control valve and improving efficiency. In general. VFD’s are only really suited to high friction head systems and not high static head systems. A useful rule of thumb is that, VFD’s are typically only justified when the dynamic head represents 50% of the total head in the system. In  a system which serves many differential pressure control valve systems, VFD’s may not be a feasible option.

To View our Blog on “Operating Efficiency of Centrifugal Pumps”